We were in Orlando recently for the 2011 InControl Conference and our friend Chris Coyier was there so we snagged him for an quick sit down to find out some of his thoughts on things the other speakers were talking about, HTML5 at the time and where he was looking for his latest CSS inspiration.

I’ve seen Chris’ talk about Pseudo Elements and this stuff really is hot. It kind of blows my mind a bit to discover it’s nothing new, it’s been around for a while now, CSS2 actually, but just hasn’t caught on. Chris has a really great post on CSS-Tricks.com that takes you through Pseudo Elements quite thoroughly.

His quick intro to Pseudo Elements is as follows:

It’s pretty amazing what you can do with the pseudo elements :before and :after. For every element on the page, you get two more free ones that you can do just about anything another HTML element could do. They unlock a whole lot of interesting design possibilities without negatively affecting the semantics of your markup.

Really great stuff to dig into, if get a chance to catch Chris giving a talk on the subject you’re in for a treat. 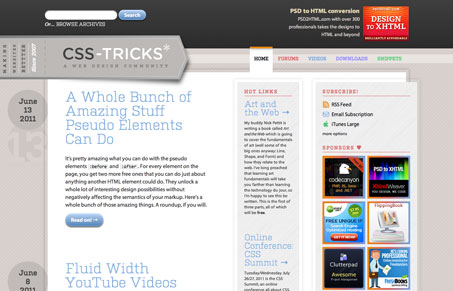 By the way Chris just launched a new version of his CSS-Tricks.com website (I think version 9 now). We’ve been fans a long time of watching this site grow and change and wish you luck with the new roll out Chris! There’s a nice post about the launch here.

Chris is the force behind CSS-Tricks.com, currently working as Wufoo’s Lead Hucklebucker. Chris is a WordPress expert having authored the Digging into WordPress book and the Lynda.com WordPress 3 tutorial series.

Here is Chris’ bio from Wufoo.com:

Chris Coyier is Wufoo’s Lead Hucklebucker and second designer. He enjoys banjos, fiddles, and finding people who have never heard of Wufoo so he can tell them all about it. He is thinking about starting a horse and wagon medicine show and taking it on the road. Only instead of medicine it will be Wufoo and instead of a wagon and the road it will probably just be a blog. Chris learned everything he knows from The Andy Griffith Show.