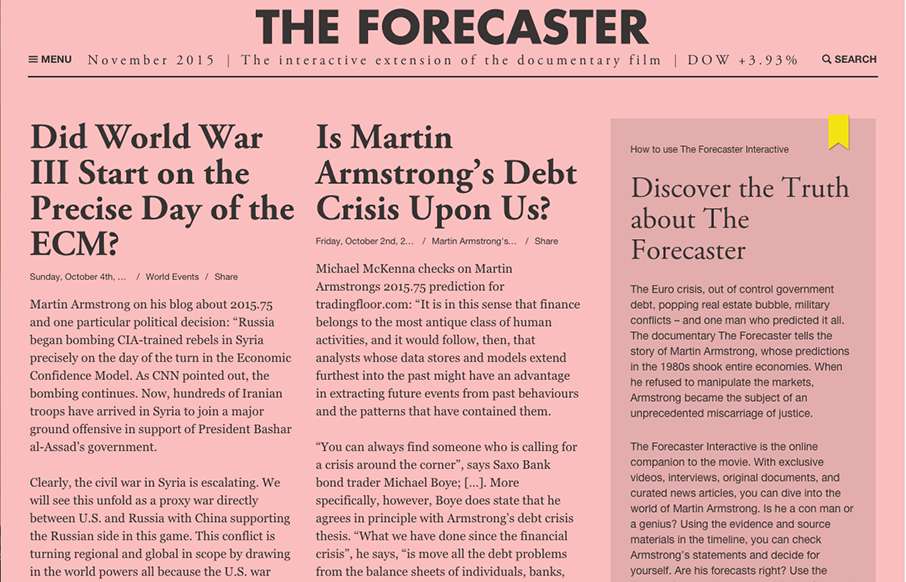 Have you ever watched a movie (documentary or historicalish fiction), and wished you had some extra insight into the background of the film? Well, for The Forecaster (see info below – and, well the website attached), they’ve done just that. It has a Financial Times pink newspaper feel – with two things I really like: 1 – It’s a small thing, but I like the change in the header as you scroll down. 2 – really cool – instead of the static view on videos embedded on the page – they have animated gifs on top of them to draw you attention. (they are bigish files – but considering the rest of the site is pretty much text, it still seems to serve up quickly).

“The Euro crisis, out of control government debt, popping real estate bubble, military conflicts – and one man who predicted it all. The documentaryThe Forecaster tells the story of Martin Armstrong, whose predictions in the 1980s shook entire economies. When he refused to manipulate the markets, Armstrong became the subject of an unprecedented miscarriage of justice.

The Forecaster Interactive is the online companion to the movie. With exclusive videos, interviews, original documents, and curated news articles, you can dive into the world of Martin Armstrong. Is he a con man or a genius? Using the evidence and source materials in the timeline, you can check Armstrong’s statements and decide for yourself. Are his forecasts right? Use the menu to jump to key moments in the film and the filters to search for specific information and explanations.”