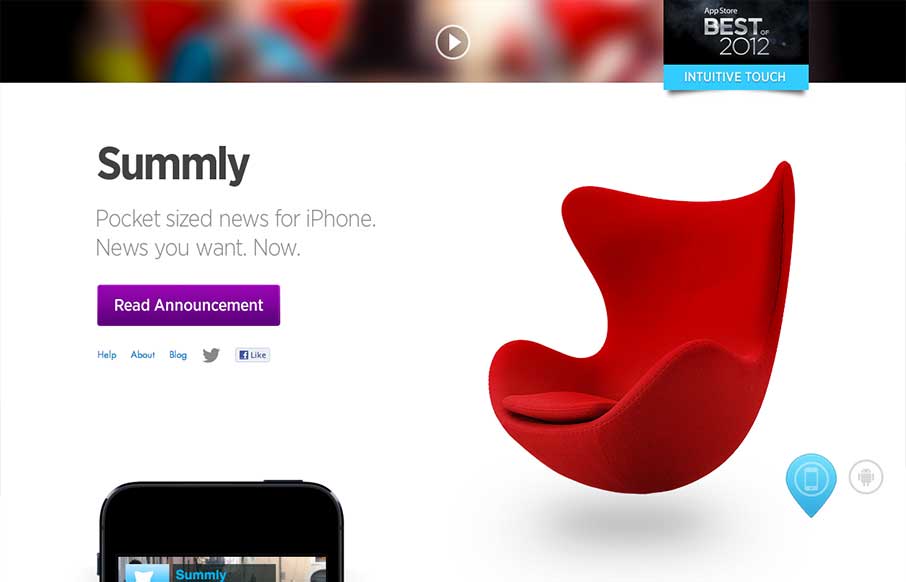 Summly has been in the news lately because the creator, Nick D’Aloisio, has just sold it for $30m to Yahoo. And he’s only 17. I haven’t used the app itself (it’s not available in the US), but it looks very cool and smart. The video is entertaining and is a great introduction to the app. It’s cool to see people rewarded for their hard work, and even though Yahoo has a new CEO, they do not have a good track record for being responsible stewards of apps that they have bought, see Delicious.

But we review websites here. The site is very slick and polished, and very much in line with many other iPhone apps. It even has the starry, galaxy-like image that is so familiar. In that sense it comes off a little generic, as if it’s just following a formula. The ‘download’ links seem a bit hidden in the bottom right corner though. I was looking for a big ‘Get it Now!’ button but it wasn’t there. (Perhaps this was replaced by the ‘Read Announcement’ button recently?) But overall, it’s very effective in getting across the gist of the app in a few short paragraphs. I was surprised to find that it’s not responsive and doesn’t seem to do anything to accomodate smaller screens. I find this extremely odd for a mobile app. Again, maybe some things have changed since the announcement, so maybe it’s not fair to be too critical.