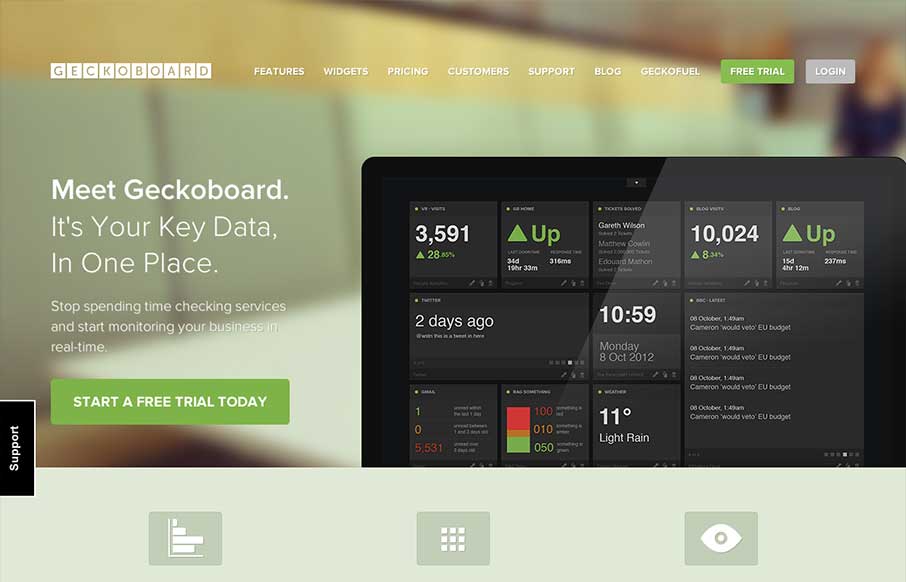 Apparently dashboards are still a thing. When I figured out what this was I had a flashback to designing overly-detailed mockups of graphs and some sort of thing that looks like a speedometer that has no possibility of ever being made functional (but it would probably involve ‘DHTML’). And then I woke up. Anyway, I always felt like dashboards were something people in charge wanted so they could feel like they knew what was going on inside their company, when in fact they had no clue, or control.

Geckoboard seems like that but instead of internal ‘metrics’ it can pull in data from all sorts of external APIs, some of which are MailChimp, Basecamp, and Google. In that sense, it seems way more useful, and also something that just wasn’t possible just a few years ago.

The site is very effective in getting the point across. The calls-to-action are very obvious and clear. “Free Trial” and “Start a Free Trial Today” are in green boxes that seem to float above the blurred photo. They effectively answers three important questions: “What is it?”, “How much does it cost?” and “When can do it?” “It’s Your Key Data, In One Place.” is short and to the point and answers the first question. The answer to the second one is “Free” (for now), so that’s an easy sell. “When can I do it?” is answered by the “today” in the big call-to-action. This is important because it tells the user that they don’t have to wait or talk to anybody, they can get right in there and mess around. This might seem like a given in web apps today, but it adds reassurance, especially when dealing with large companies. It means that some internal person at a large company can test drive this thing without having to ask a higher-up for permission.

And that’s all a user needs to know to get them to click, if it’s something they’re interested in. This site manages to achieve all that in about 10 words and in the top 500 or pixels of the screen.